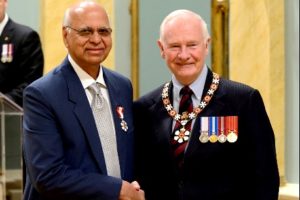 Dr. Jagannath Wani was Professor Emeritus of Statistics & Actuarial Science at the University of Calgary. A caregiver of his wife who lived with schizophrenia, he focused his work in Canada on mental illness and promotion of India’s art and culture and multi culturalism in North America. Dr. Wani founded Schizophrenia Society of Alberta and raised funds for scholarships and chair for study of schizophrenia. .

Dr. Wani founded Maharashtra Seva Samiti Organization (MSSO) for development, relief work and education in Maharashtra and served as its President from 1984 to 2009, securing several million dollars in grants from Canadian Government agencies for projects in India and supervised major fund raising for 1993 earthquake victims in Latur, India. He was conferred in the year 2013 the Order of Canada, the highest civilian honor, by the Governor General of Canada.

In India, he founded in 1997, Schizophrenia Awareness Association (SAA) in Pune for creating awareness about schizophrenia and for supporting self–help groups for families of mentally ill, He constructed for SAA, a centre for rehabilitation for persons afflicted with mental illness, produced awareness movies, and published books relating to mental health.

Dr. Wani instituted K.S. Wani Memorial Trust by donating all his inheritance for development of less privileged people and completed several projects in the area of education, health and vocational training. His inspiring memoirs in Marathi, Andharateel Prakashvata, were published in Pune in 2009 by the Continental Prakashan, followed by its English version Triumphs and Tragedies. Subsequently an abridged version of his memoirs “Sata Samudra Palyad” was also published in 2015. His favourite project was his memoirs for North American readers, “An Unarranged Life” and its Marathi translation, “ Bin Ghadicha Dav” published by SAA, just a few days before he passed away.